Different sport situations have different energy demands. In some situations, energy must be supplied very quickly for the muscles to produce high-intensity results. In others, energy does not have to be provided at as high of a rate, but must be supplied over a longer period of time.

There are 3 Energy Systems:

Athletes who compete in sports that require high amounts of short duration intensity and acceleration will access this energy system.
The system does not use oxygen, but rather your body’s CP (creatine phosphate) stores to create energy for a short duration. Shot-putters, weight lifters, football players, gymnasts, sprint-distance runners, or any athlete that utilizes explosive movements will utilize this energy system.
Training this system through strength and power exercises prolongs the ability to maintain a higher intensity.

The anaerobic lactic (AL) system (also known as fast glycolysis) provides energy for medium to high-intensity bursts of activity that lasts from 10 seconds to a max of approximately 90 seconds.
The ability to sustain this energy system is commonly viewed as an important athletic attribute in team sports such as basketball, hockey, ringette, and soccer, where shifts, or transitions, are a part of the game. Individual sports that consist of rallies or routines, such as tennis, figure skating, gymnastics, and skiing, utilize this system. Finally, there are several events within particular sports that rely almost exclusively on this energy system, such as rowing (500m), and middle distance runners (400m-800m).

The anerobic alactic system does not require oxygen, however, whereas the ATP-CP system will only produce energy for 10 seconds, fast glycolysis can work at a capacity for much longer.
As a result, waste products such as lactic acid accumulate in the blood and in muscle cells.
The burning sensation in the muscle, shortness of breath, and fatigue are all symptoms of lactic acid build up and thus impacts the athlete’s ability to perform. Focusing on this energy system during training can reduce the amount of lactic acid that builds up, and prolongs the ability to utilize this energy system, which results in a higher tempo and intensity.

The aerobic system provides energy for low to medium-intensity activities that last anywhere from two minutes to a few hours. Any sport that has repeated shifts, rallies, events, or sustained exercise, such as long distance swimming, crew (rowing) and kayaking rely on the aerobic system.
Unlike the other two systems, the aerobic system requires oxygen and takes longer to overload and fatigue the system.
Training this system enhances the body’s ability to utilize oxygen, and allows an athlete to prolong the ability to sustain higher intensities before tiring and cramping out.
Summary: At any given time, each system is contributing ATP for exercise energy. However, the contribution of each system varies on the intensity and duration of the activity. The chart below summarizes the average energy system contribution during different sports.

If you want to work on improving your athletic attributes to better fit the energy system requirements of your sport, get in touch with our Sport Performance Specialists at performance@sportmanitoba.ca.
For more information on energy system training, check out the National Strength and Conditioning Association’s textbook titled ‘Essentials of Strength and Conditioning.’
Related News Posts 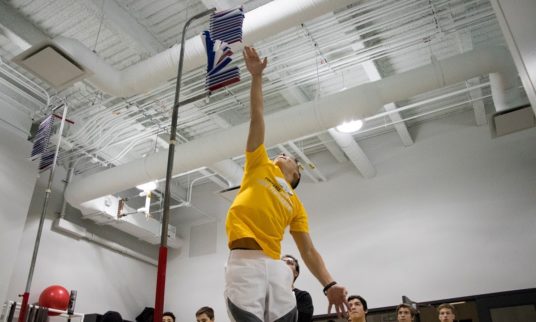 I’ve been testing athletes as a part of their regular training programs for over 20 years now, and here are my key takeaways from the experience: coaches love it, most athletes dread it, and most of the time, the information gathered from it isn’t used the way it should be used. Let me expand on these… The Science and Art of Microdosing

With Summer in the rear view mirror and Fall now here, we in the sport performance world are typically coming to the end of a full off-season of intense training to prepare for our Winter sports season. Of course, not all sports follow this schedule, so this article could easily be applied to any athlete… The 2022 Canada Summer Games are quickly approaching. If you’re competing in the Games or in hot, humid temperatures, it is important to prepare your body to handle the heat and perform at your best when it matters the most. The key to peak performance is proper preparation. The Niagara Region has an average temperature… Athlete Testing: What You Need to Know and Why it is Important

I’ve been testing athletes as a part of their... Nick Winkelman is the head of athletic performance &... Medicine balls are great training tools for a variety of reasons! The main benefit is that they can provide just the right amount of load to train upper body explosiveness. Typically when targeting the ‘athletic ability’ of muscular ‘power and explosiveness’, you’ll start at a load within 30-40% of your 1 rep maximum, and potentially…